Like many indie authors, I work for a living. There are worse things, like plantar warts. Never mind. Because I live in LA, having a day job requires me to endure a long, daily commute. Several years ago, I decided to abandon my car and use public transportation. Though the combination of trains and ride services such as Uber and Lyft, my commute isn’t any shorter, it does free me up to do other things. For instance, I can read. And more importantly, I can write.

Stalling Our Way to Happiness
Most writers I know are born procrastinators. Netflix and Amazon Prime were made for us—not to mention mobile phones bursting with games and social media apps. And if like me, you are stuck on a train with a bunch of strangers, it’s easy to tell yourself there’s no way you can get any real writing done. For one thing, it’s too noisy, what with all the announcements and people watching funny cat videos without earbuds.

And then, there’s the problem of where to put the device. The light rail trains don’t have flat surfaces, other than the floor. And the seats are narrow, so other passengers are usually sitting very close. In short, there are plenty of reasons not to write on the train.

When You Wish Upon a Star
A few months ago, I decided I’d had enough. I was going to write every morning on the train, no matter what. So, I took myself on a journey of discovery. I already owned a MacBook Air, which is what I use to do most of my writing. Unfortunately, because of the problems mentioned above, I found that it was too large for me to work comfortably. I needed something I could balance on my lap—a device that runs Microsoft Word. 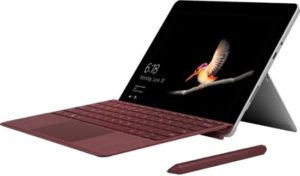 After spending time researching laptops, I decided on a Microsoft Surface Go. Though small, the device is responsive, and the screen is bright. And battery life is outstanding. As a rule, I don’t like touch screens, so I decided to purchase the optional keyboard, which I find to be comfortable, though compact.

My only complaint is the touchpad. It’s overly sensitive and often sends my cursor flying to unknown parts of the page, which I didn’t intend. But, trust me, that’s a small price to pay to avoid writing with paper and pen. Even on a full train, I can bang out anywhere from 750 to 1,000 words, which is plenty for a morning’s work.

Go Forth and Write
Now, I’m not trying to sell you on Microsoft products. I’m sure there are plenty of other choices out there. All I’m saying is, writing on a train—or a bus—is possible with the right device. If you’re the kind of person who can get work done on an iPad, then go for it. I’m just happy I found a solution that works for me.