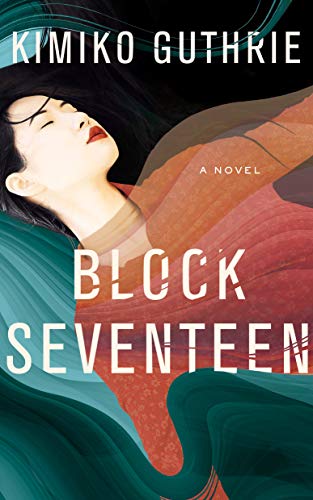 In Kimiko Guthrie’s dreamy, mystifying novel Block Seventeen, we meet Jane, a woman in her mid-thirties who is half-Japanese—and half-awake. At first, it seems she struggles with the ordinary things that plague most of us. Earning a living, dealing with a faulty apartment heating system, and putting up with a boyfriend who’s beginning to drive her crazy. But that’s not the half of it.

Add a neighbor’s bawling baby, antlers from a dead deer, and an absent mother, and you’ve got quite a tale. And then, there’s the sleepwalking. You don’t have to be a psychiatrist to know that Jane, who rejects her given name Akiko, is lost. And as things get worse, it’s not even clear she’s alive. Yet she is. Ask Shiro, her paranoid, conspiracy theory-loving fiancé.

A theme that repeats—and one that moved me immensely—is that our ancestors’ struggles are hard-wired into us. Sometimes, we get glimpses. And sometimes, we suffer as these people did. Furthermore, hiding from our past appears to make the spirits angry. And right now, they’re mad at Jane. In ways that she will come to understand, they compel her to dig into the past. Otherwise, she’ll never be at peace.

If you enjoy contemporary women’s fiction and the Japanese-American experience, I highly recommend Block Seventeen.

Akiko “Jane” Thompson, a half-Japanese, half-Caucasian woman in her mid-thirties, is attempting to forge a quietly happy life in the Bay Area with her fiancé, Shiro. But after a bizarre car accident, things begin to unravel. An intruder ransacks their apartment but takes nothing, leaving behind only cryptic traces of his or her presence. Shiro, obsessed with government surveillance, risks their security in a plot to expose the misdeeds of his employer, the TSA. Jane’s mother has seemingly disappeared, her existence only apparent online. Jane wants to ignore these worrisome disturbances until a cry from the past robs her of all peace, forcing her to uncover a long-buried family secret.

As Jane searches for her mother, she confronts her family’s fraught history in America. She learns how they survived the incarceration of Japanese Americans, and how fear and humiliation can drive a person to commit desperate acts.

In melodic and suspenseful prose, Guthrie leads the reader to and from the past, through an unreliable present, and, inescapably, toward a shocking revelation. Block Seventeen, at times charming and light, at others disturbing and disorienting, explores how fear of the “other” continues to shape our supposedly more enlightened times.