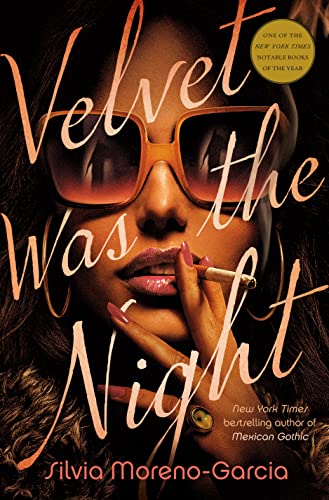 Reading about a country’s violent past is troubling enough. But frightening when it happens in a neighboring country that purports to be our friend and reliable trading partner. I was in school when the events described in Velvet Was the Night occurred. I can still recall the news footage of that horrible day in 1971—El Halconazo—and its bloody aftermath.

Nearly 120 student protesters were killed by government-trained assassins as part of Mexico’s Dirty War. The closest thing we had here in the US was the Kent State shootings in 1970. That day, National Guard troops killed four students and wounded many others as they protested the Vietnam War.

The novel centers around Maite, a young woman working in a legal firm. She fantasizes about romance courtesy of the novelas she picks up at the newsstand. Her innocent world is shattered, though, when she meets Leonora, a spoiled rich girl flirting with politics.

And then, there’s Elvis. He’s a young drifter obsessed with American pop songs and a member of the Hawks, one of the covert paramilitary groups out to punish dissenters who oppose Mexico’s president, Luis Echeverría Álvarez.

The main characters in author Silvia Moreno-Garcia’s book seem to suffer from ideology or fantasy. What binds them together in the narrative is fear. Fear of change, fear of the unknown, and fear of self. As a result, more are destined to die.

Velvet Was the Night is a powerful novel of desire and deceit. Moreover, it’s an insightful window into the minds of Mexico’s youth in the seventies. As I submerged myself in the story, I began to see my younger self in Elvis. Aimless, futureless, and confused. And that made me afraid.

1970s, Mexico City. Maite is a secretary who lives for one thing: the latest issue of Secret Romance. While student protests and political unrest consume the city, Maite escapes into stories of passion and danger.

Her next-door neighbor, Leonora, a beautiful art student, seems to live a life of intrigue and romance that Maite envies. When Leonora disappears under suspicious circumstances, Maite finds herself searching for the missing woman—and journeying deeper into Leonora’s secret life of student radicals and dissidents.

Meanwhile, someone else is also looking for Leonora at the behest of his boss, a shadowy figure who commands goon squads dedicated to squashing political activists. Elvis is an eccentric criminal who longs to escape his own life: He loathes violence and loves old movies and rock ‘n’ roll. But as Elvis searches for the missing woman, he watches Maite from a distance—and comes to regard her as a kindred spirit who shares his love of music and the unspoken loneliness of his heart.

Now as Maite and Elvis come closer to discovering the truth behind Leonora’s disappearance, they can no longer escape the danger that threatens to consume their lives, with hitmen, government agents, and Russian spies all aiming to protect Leonora’s secrets—at gunpoint.

Velvet Was the Night is an edgy, simmering historical novel for lovers of smoky noirs and anti-heroes.