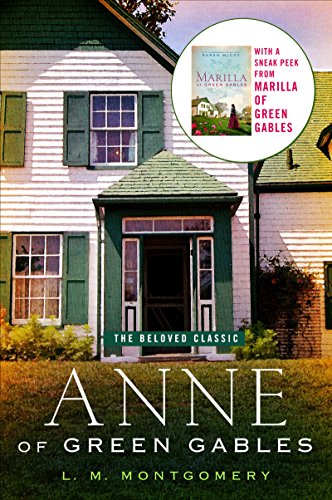 I suppose if I had been an English Lit major, I would have read this beautifully crafted classic years ago. But I never got around to it until recently. I don’t know what drew me to Anne of Green Gables, L.M. Montgomery’s tale of an extraordinary orphan who, by her very nature, continually amazes and confounds everyone in her path. Maybe it was because I have two daughters? Sure, let’s go with that.

What struck me more than anything is Anne’s indomitable spirit. And let me tell you, it’s so contagious that after finishing the novel, I realized that in some ways I had changed, demonstrating once again the power of words to move the human heart. I want to talk about three things I learned, and I hope that for those of you who have not read this lovely book, you will set aside the cozy mysteries and historical romances for a time and introduce yourself to Anne Shirley. Okay, let’s begin.

The Human Spirit Can Soften Even the Most Hardened Hearts
By the time Anne arrives at Green Gables, she has charmed the socks off Matthew Cuthbert. This man is the classic strong, silent type, but in his heart burns an eternal child who, in some ways, longs to see the world as Anne does—a wondrous place full of mystery and promise. He had actually gone to the train station to collect a boy from an orphanage to help out at Green Gables now that he and his sister, Marilla, are getting on in years. But due to a mix-up, Anne was sent, and she is the one Matthew finds waiting for him at the station. At first, worried that he would now have to return Anne to the orphanage, he quickly decides that it might not be a bad idea to keep the girl. But he knows his sister, and Marilla surely won’t have it.

Marilla is interesting. Though she and her brother manage a small farm with all the work that entails, I really couldn’t see that things were that bad. There was always plenty of food, a warm house, and beauty all around them in Avonlea. Yet we find that Marilla is a dour woman who never permits herself even a smile. She acts severely, and to meet her, you would think circumstances were much worse. What’s interesting, though, is that secretly Marilla has a sense of humor she keeps to herself.

Despite Marilla’s temperament, Anne manages to convince her to let her stay and then, over the course of the novel, proceeds to soften Marilla’s heart to the point where the old woman can express love outwardly. No one—not even her brother—could do that. Anne’s incredible spirit has triumphed.

Never Underestimate a Girl
Though only eleven when she arrives at Green Gables, Anne has already been through a lot. While being passed around from family to family, she learns some useful skills. But adults don’t believe children know anything, which is best illustrated by Mrs. Rachel Lynde’s attitude toward the girl at the beginning of the story.

At one point, Anne is forbidden to see her dearest friend Diana because, through no fault of her own, she served Diana homemade currant wine instead of raspberry cordial. When Mrs. Barry finds her daughter incapacitated, she ends the relationship on the spot, thinking Anne is a wicked, irresponsible girl who has gotten her daughter drunk on purpose.

Later, Diana’s little sister, Minnie May, comes down with croup, leaving the clueless babysitter “helpless and bewildered.” Mr. and Mrs. Barry are away and, as the child’s condition worsens, Diana panics and runs to Green Gables for help. Marilla is also away, and while Matthew goes to get the doctor, Anne accompanies Diana back to her house. Having babysat her share of children, Anne knows well how to treat croup and takes charge, administering regular doses of ipecac. By the time the doctor arrives, the child is sleeping comfortably.

When Mrs. Barry learns that it was Anne who saved her daughter, she happily agrees to allow Diana and her to stay friends.

Recognizing That Mistakes Are Necessary Is Very Grown Up Indeed
Anne Shirley makes lots of mistakes throughout the book, exasperating Marilla and making her wonder how she ever let the girl stay. Some of them are funny, like the time Anne leaves a pie in the oven to burn because she is daydreaming. Others are more serious, as when Anne meets the judgmental Mrs. Lynde and screams in her face for insulting her. But in each case, the girl learns something. Take a look at this exchange between Anne and Marilla later in the novel when Anne is older:

“But have you ever noticed one encouraging thing about me, Marilla? I never make the same mistake twice.”

“I don’t know as that’s much benefit when you’re always making new ones.”

“Oh, don’t you see, Marilla? There must be a limit to the mistakes one person can make, and when I get to the end of them, then I’ll be through with them. That’s a very comforting thought.”

I’ve known plenty of adults who never figured that one out.

Wrap-Up
In a way, Anne Shirley has changed my outlook. I tend to get stressed easily and constantly miss the everyday beauty around me because I’m always focused on getting the next thing done. After finishing the novel, I decided I am going to take more time, enjoy family and friends, and notice things. Yeah, I know. Corny, right? Well, it’s already made a difference. The trick is to keep it up, though. Often, I find myself slipping into old patterns—especially while driving. I sometimes wonder what kind of driver Anne would make. I mean, she does tend to daydream a lot.

Back to the big lesson I learned from reading Anne of Green Gables. It’s about finding joy in everyday things and sharing that joy with others. Not a bad way to live, if you ask me. Peace and love.