I used to ride horses. I know, right? Let me just say that these creatures are beautiful. And when the horse and rider are one, the experience can be magical. But horses are also dumb—and incredibly powerful. Not a great combination, if you ask me. If a horse doesn’t want you on its back, it will throw you. And there is nothing you can do about it. Ask a rodeo cowboy. We’re talking half a ton of raw animal power, people. Oh, and they bite, too. But—and I can only vouch for English riding—show a horse a thirty-inch riding crop, and things can change for the better. You don’t even have to use it—just let them see it out of the corner of their eye.

Lately, I’ve been reading posts by other writers moaning about their inner critics. You know what I’m talking about. The inner critic is that nagging little macher who’s always in your face whenever you try putting pen to paper (not to be confused with one’s Muse). And, as far as I know, it doesn’t matter what kind of writer you are. Mine is a guy, is shorter than me, and resembles Ray Liotta, for some reason. Though he smells like hand sanitizer, I gotta give it to him—he dresses well. Now, I have never met Ray Liotta, so rather than besmirch his good name, I’ll call the bane of my existence “Stan.”

The Prick Who Came to Dinner
Stan is not the kind of person who values relationships, so obviously, he’s single. He’s been known to vanish for most of the day—I have no idea where he goes. Maybe he’s torturing some other poor schmuck. Which makes me wonder. Does he talk about me? Never mind. Stan has an uncanny ear, and as soon as he hears me typing on my laptop, he’s in the room, standing directly behind me. Breathing through his nose. Watching every letter that appears on the screen. Well, that’s how things used to be, anyway. Sound familiar?

If he gets the chance, Stan will tell me what I am writing is crap and should be burned. He wonders aloud how I’ve managed to have any success at all as a writer and suggests I look into selling insurance. He enjoys laughing at my analogies, similes, and metaphors, and bawls comically whenever I attempt to craft a tender scene. In short, he’s merciless. Now at this point, I’ll bet you think I hate Stan, right? Well, I don’t. Because as annoying as he is, he’s smart—really smart. Okay, he’ll never invent time travel. But he knows a lousy sentence when he reads one.

Stan, ladies and gentlemen, is my inner critic, and I need him. There, I said it. But here’s the thing: I need him on my terms, not his. If it were up to him, I would never write another word. “The world will thank you,” he told me one time, leaving a trail of pistachio nut shells on the shag carpet. But I’m not listening. A long time ago, I decided to train him. Just like a horse. And although he doesn’t always behave, things have gotten way better.

Now, there are writers out there far more qualified than me to explain the phases of writing in a way that makes sense. Nevertheless, I’ll give it a go. 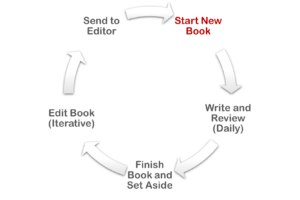 Dreams and Nightmares
An idea comes to me, and I jot it down in my Big Book of Ideas. This can happen when I overhear a piece of a conversation or in the middle of the night when I’m trying to fall asleep. There’s really no rhyme or reason to it. Most of the time, the idea just sits in that book, collecting dust like a lonely little toy no one wants to play with. Sometimes, I incorporate it into something else. And on rare occasions, it becomes a short story or even a novel. I do not control this process—it just happens. And as I record it, Stan is nowhere in sight.

The Dreaded First Draft
This is where I sit down to the blank page. Or, in my case, the blank screen. By the way, this stage applies to short or long fiction. I’m a pantser, so I have only the vaguest notion of how to write this thing. I have a protagonist and, if I’m lucky, an antagonist. But other characters come into the picture as I go. The minute I start writing, Stan waltzes into the room, ready to tear me a new one. But before he can take his place behind my chair, I show him the riding crop. His eyes get huge, and he slinks away, muttering something like “Just for that, I’m eating all the Häagen-Dazs.” But don’t be fooled. He’ll continue trying to get back into the room, usually pretending to be the cable guy. My job is to keep him out until I finish the day’s writing. And let me tell you, it’s exhausting.

The Baby Edit
This happens the next day. I read what I’ve written and invite Stan to join me. That’s right. This pomaded idiot is like a kid in a candy store as he goes to work, pointing out lame construction and tired clichés. After allowing him to eviscerate me, I kick him out and proceed with the next day’s writing.

Keep in mind these last two phases continue until I finish the book or story. Sometimes, I get stuck and work on a different project. Currently, I have at least three unfinished novels kicking around. I’m pretty sure I will finish them. But even if I don’t, others will take their place.

The Mother of All Edits
This is where I edit the entire manuscript, with Stan at my side. I leave the crop on the desk so he can see it, in case he gets any ideas. Usually, he keeps his snarky comments to himself and provides useful suggestions on how to improve what I’ve written. This process takes days, and when I am finished, I set the work aside. I may go through this stage half a dozen times over the course of months. When I am absolutely sure the thing is perfect (nothing is perfect, but you know what I mean), I send the book off to my editor.

Wrapping Up
So, there you have it. Every writer approaches the process differently. No matter how you write, though, there is one thing I would advise. Never mix writing and editing. That’s like inviting Stan to sit down. And you don’t want that, trust me. For one thing, he’s never had an original idea in his life. Also, writing is miserable enough without saddling yourself with a banshee screaming in your ear over every ill-chosen bon mot. Not to mention those pesky adverbs. Anyway, enough. I’d love to hear how you deal with your inner critic. Why not post a comment? In the meantime, I’ll leave you with this quote.

You know that sickening feeling of inadequacy and over-exposure you feel when you look upon your own empurpled prose? Relax into the awareness that this ghastly sensation will never, ever leave you, no matter how successful and publicly lauded you become. It is intrinsic to the real business of writing and should be cherished. ― Will Self