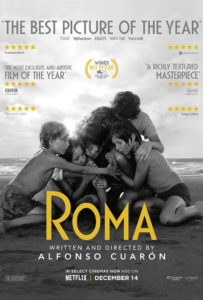 By the time I reached my twenties, I had seen a number of Mexican films, many of them produced during the Golden Age of Mexican Cinema. My favorites were those directed by the incomparable Spanish director Luis Buñuel—titles such as ‘Subida al cielo,’ ‘Ensayo de un crimen,’ and ‘Nazarín.’ Recently, I saw ‘Roma’ by Alfonso Cuarón, the talented director of ‘Y Tu Mamá También,’ ‘Children of Men,’ and ‘Gravity.’ And, like those great films of the golden age, I was thrilled to see Cuarón had decided to tell his story in black-and-white. Here is the film’s logline:

A story that chronicles a year in the life of a middle-class family’s maid in Mexico City in the early 1970s.

Doesn’t sound all that compelling when you put it that way, right? Well, this film has depth, my friend. And tragedy, suffering, and love. But it is also a celebration of the everyday lives of women who must go on, no matter the obstacles. For me, three things stood out.

A Woman’s Plight Is Universal
When we first meet the maid Cleo, we see her washing down the enclosed patio of the family’s home in the city. The director starts and ends the movie with water. Water washes, it breaks—signaling birth—and it almost kills in the form of an angry ocean.

Cleo is sweet and beloved by the family. As she goes about her daily duties, her mistress Sra. Sofía is coming apart as her marriage crumbles before her eyes, her husband having decided to leave the children and her for another woman. Then, after repeated sex with her boyfriend Fermín, Cleo finds herself pregnant. When she informs him, his churlish response is, “What’s it to me?”

Unlike the heartless men in this story, the women band together. Upon learning of her condition, Sra. Sofía doesn’t hesitate to assure Cleo that everything will be fine and that she must remain with the family. As time goes on, she even sends Cleo and Sra. Sofía’s mother to the furniture store to purchase a crib.

There’s really nothing new in the situations these women find themselves in. But it’s their response to misfortune and their determination to carry on that’s so moving. Toward the end of the film, Sra. Sofía tells Cleo, “No matter what they tell you, we women are always alone.”

Violence Is Easy, Love Is Hard
‘Roma’ takes place in the early 1970s against a backdrop of violence. Protesting students are shot dead in the streets by the police. The Tlatelolco massacre, during which nearly fifty civilians were killed at the hands of the police and the army, had actually occurred in 1968. I’m curious to know whether the violence continued into the 1970s as the film suggests. What struck me most about those chaotic scenes was, one minute the cops are sitting around smoking, and the next they are firing into the crowd.

Speaking of violence, Fermín’s answer to his miserable upbringing is to better himself through martial arts. Though he has the talent and the discipline for it, he has none of the maturity. He’s still as angry as ever and, after hearing he is a father, he threatens to beat up Cleo—and her unborn child. Then later at the furniture store, he joins in the street violence, shooting the innocent.

Family Is Everything
Overall, aside from the doctor who attends Cleo at the hospital, men don’t come out looking too good in this thing. They are, for the most part, corrupt, self-centered, and brutish. In the final scenes, it’s the women and the children who are left behind to get on with their lives.

Cleo loves the family so much that, when two of the children are carried off in the waves of a turbulent sea, she goes in to rescue them, even though she cannot swim. In the end, she doesn’t have Fermín, and she doesn’t have her child. But she has the family.

And they have her.