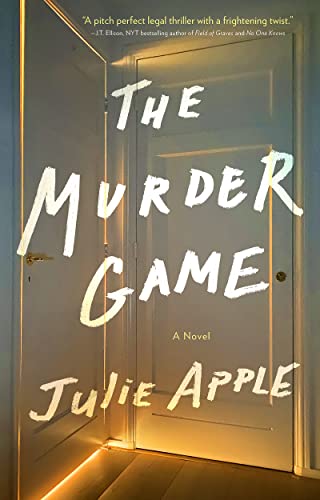 Prosecuting someone you went to law school with is probably not the best idea. Conflict of interest? Where to begin… When a case lands on Meredith’s desk, she rightly tries to recuse herself. But then—and I’m not sure this would fly in the US—she’s forced to take the case anyway.

Julian wasn’t her ex-boyfriend, so there’s that. But his defense attorney was—sort of. Jonathan is a puzzle. He cares for Meredith yet doesn’t express his feelings in words. In fact, he’s pretty blasé about the whole thing. Meredith is involved with Chris now—sort of. As personal relationships go in this novel, there’s a lot of “sort of” going on.

At the heart of the story is an age-old law student thought experiment: Can someone pull off the perfect murder? Meredith quickly learns that if the defense has anything to say about it, it’s precisely what Julian will do. I have zero law background, but I enjoyed all the legal maneuvering. The Murder Game is an entertaining tale for fans of legal thrillers.

For fans of The Secret History and How to Get Away With Murder comes an exciting new voice in suspense fiction. Ten years working as a prosecutor have left Meredith Delay jaded and unsure of what she wants out of life. She’s good at her job, but it haunts her. Her boyfriend wants her to commit, but she keeps him at arm’s length. Then Meredith is assigned to a high-profile prosecution involving the violent murder of a fallen hockey star. At first, it appears to be just another case to work. But when her old friend Julian is accused of the murder, it takes on a whole new dimension. Meredith, Julian, Jonathan, and Lily were a tight-knit group in law school. But now, Jonathan’s defending Julian, and Lily’s loyalties aren’t clear. And when Julian invokes a rare—and risky—defense, Meredith is forced to confront their past. Has something they played at as students finally been brought to death?