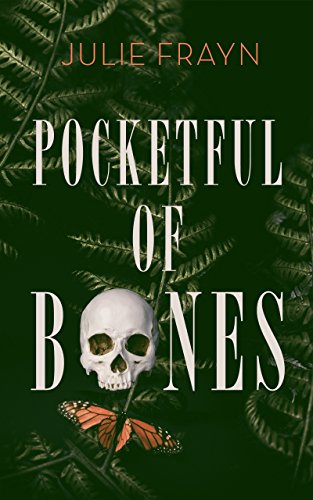 Pocketful of Bones is a quiet story in the way Psycho and The Lottery are quiet. At least, that’s what I was thinking as I made my way through this marvelous and absorbing tale of villains, victims, and valentines. Maybe unsettling is a better description. One minute, someone is having a conversation, and the next, they are dead. And it’s hard to know where you stand with well-drawn characters like Tibba and Finny because, at times, someone can at a moment’s notice turn from victim to villain. And someone who you thought might be conniving turns out to be sweet and loyal.

For me, the best thing about the novel was, I really didn’t know what to expect. For the record, I’ve had my fill of serial killers. So, as the bodies piled up in Pocketful of Bones, I was surprised at the logic and—dare I suggest it?—the correctness of it. The story unfolds as though Fate itself were guiding mother and son to their inescapable destinies. And along the way, they planted the annuals. In short, they were born for this.

If you’re looking for a satisfying read that both perplexes and horrifies in a Canadian sort of way, I suggest you read this book. And remember: anyone is capable of murder; some see it as just another tool in the toolbox.

Book Description
Finnegan MacGillivray, red-haired, freckle-faced social pariah, finds solace in his mother’s garden while she entertains “dates” in his home. When an accident takes the life of a friend, Finnegan buries the evidence amid the purple dead nettle and bougainvillea, and unearths a treasure trove of human remains. Did his house rest atop an ancient burial ground? Or was there a killer tucking him into bed at night?

His fascination with bones grows as fast as his obsession with his mother. She rejects his advances, and he escapes to the other side of the country. Years later, he returns to his childhood home, to the secrets and the guilt and the bones — and to fulfill his destiny.