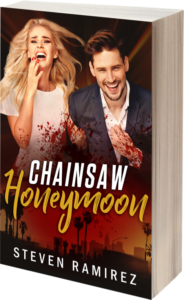 I feel honored to be featured today on Sue Coletta’s Murder Blog. In case you didn’t know, Sue is the author of the chilling Mayhem Series. I was worried my post didn’t contain enough gore, but thankfully, she let me slide. Take a look…

Maybe it’s the fact that I live in a houseful of women. Or that throughout my life I’ve been surrounded by women who have had a strong influence on me. Whatever the reason, a few years ago I set out to write a screenplay about a crazy-smart girl named Ruby who is determined to get her parents back together by any means necessary. Back then, I had the characters pretty much fleshed out. I had smart dialogue and lots of manic scenes I hoped would explode off the screen. But for some reason, I just couldn’t make it work. After a dozen drafts, I finally set it aside to the sound of that WAH-WAH-WAH trombone burping in the background.

I’d been writing screenplays for years—one of which actually sold. And Chainsaw Honeymoon was pretty much my last shot before deciding my time was better spent writing novels. Since then, I managed to publish three novels and a novella, as well as short stories and a children’s book. As I was about to begin working on a new paranormal story, I got the uncontrollable urge to go back and revisit my young adult story and see if, just maybe, I could turn it into a novel.

To read the rest of this post, please visit the Murder Blog.