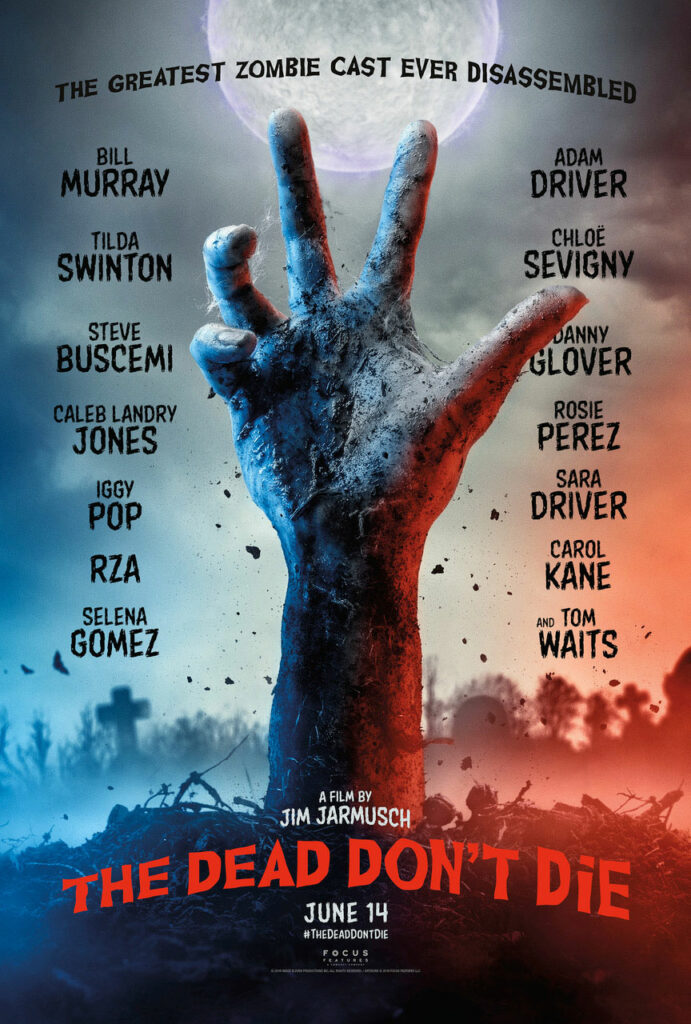 I’ve been a fan of Jim Jarmusch since forever. What I love most about his movies is, he doesn’t waste time and money. His stories are lean, character-driven pieces that get to the point quickly. Films like ‘Stranger Than Paradise,’ ‘Down by Law,’ and ‘Broken Flowers.’ No boring backstory, no big government conspiracy. Just people dealing with everyday shit they have no control over.

Not Every Zombie Story Has to Be the Apocalypse

‘The Dead Don’t Die’ is the director’s latest film, and it’s a hoot. We’ve got Bill Murray as the police chief of a small town who, by his own admission, should’ve retired two years ago. Adam Driver as an officer, who seems to be the only person in Centerville that seems to know they are all in a Jim Jarmusch movie. And other wonderful actors like Chloë Sevigny, Tom Waits, Steve Buscemi, Danny Glover, Tilda Swinton, and Selena Gomez.

The script is smart and low key. Lines are repeated by different characters, giving the film an almost Sartre vibe where everyone is caught up in an existential nightmare that won’t end. Here’s an example, which each character varies a little:

Oh, and there’s the dead. Yeah, they’re coming out of the ground like in the original ‘Night of the Living Dead,’ with at least one of them reeking of cheap chardonnay.

When the Dead Start Rising, That’s When You Know Who Your Friends Are

As things go from bad to worse, people act out in different ways. Hermit Bob keeps an eye on the proceedings from a distance, making comments like this gem:

Cliff and little Ronnie. Warriors. Among the dead. Zombies. Remnants of the materialist people.

Officer Mindy continues to freak out with each new horror. Meanwhile, Hank and Bobby have banded together to try and save the hardware store—and themselves. And good ol’ Farmer Frank goes it alone with his gun and deep-seated prejudices as he discovers all his cows and chickens have vanished. Tilda Swinton, who is always mesmerizing, is perhaps the only one who confronts the danger head-on, using a razor-sharp Katana to behead the invaders.

And some are just clueless, like the three out-of-town hipsters staying at the local motel. For some reason, Cliff and Ronnie have decided they are from Cleveland.

If You’re Going to Die, You Might as Well Have a Good Theme Song

Just so you know, everyone—and I mean everyone—in this thing dies at the end. I think Officer Ronnie said it best:

If you ask me, this whole thing is going to end badly.

Well, okay, maybe not Hermit Bob. I mean, someone has to survive to tell the story, right? But here’s the thing. If you’re going to make a movie about zombies taking over a small, peaceful town and ripping everyone to pieces, then you’d better have a good theme song.

And this movie does. The song “The Dead Don’t Die,” written and performed by Sturgill Simpson, is perfect. In fact, for those who might be squeamish about seeing so much blood and guts, you might want to purchase the tune so you can at least feel you were a part of the experience.

Fun fact: According to the credits, someone got hired as a zombie movement consultant. What a country.

The Greatest Zombie Cast Ever Disassembled