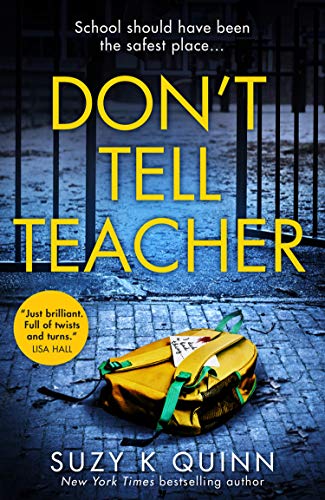 There’s an unbreakable connection between mothers and their children, a special bond that compels them to protect their offspring at all costs. And when someone threatens the child, Mother provides a powerful response. For Lizzie Riley, the solution is to move her son, Tom, away from London to a sleepy suburb where the two of them can start over.

As in all good psychological thrillers, running away from something—in this case, an abusive husband—introduces an even worse situation. The private school Tom attends is oppressive, and the headmaster oddly secretive. And with each new, disturbing revelation, Lizzie begins to unravel. It seems the bad luck she’s experienced has followed her.

Others try to help. Kate, the social worker assigned to Tom, is young and hopeful. She and her supervisor have seen it all before. Violent husband. Injured wife. Terrified child. But, somehow, the case isn’t textbook. And that’s what drives the reader mad, asking—pleading, really—why? For all that is good and holy, WHY?

For those who enjoy the twists and turns of a disturbing tale told by an unhinged narrator, Don’t Tell Teacher is for you. For those with children, hug them. And thank you stars, it’s only a story.

School should have been the safest place…

For Lizzie Riley, switching her eight-year-old son Tom to the local academy school marks a fresh start, post-divorce. With its excellent reputation and outstanding results, Lizzie knows it’ll be a safe space away from home.

But there’s something strange happening at school. Parents are forbidden from entering the grounds and inside, there are bars across the classroom windows.

Why is Tom coming home exhausted, unable to remember anything about his day? What are the strange marks on his arm? And when Lizzie tries to question the other children, why do they seem afraid to talk?

Tom’s new school might seem picture-perfect. But sometimes appearances can be deceiving… 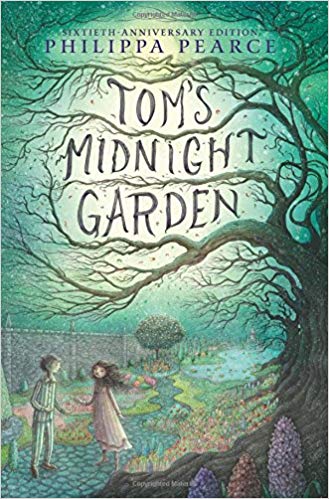 After reading this magical novel, my only regret is that I was unaware of it when I was a child. Tom’s Midnight Garden is filled with imagination. The author has infused Tom Long with the curiosity, impatience, and determination of youth. Though respectful to his aunt and uncle, who have graciously taken him into their home while his brother recovers from the measles, Tom is adventurous and refuses to spend summer as a quiet guest.

Upon finishing the book, three things occurred to me.

As most children will tell you when recalling their favorite fairy tales, there’s always a bad guy. And that’s because the hero never starts off as a hero. He must discover in himself powers he never knew he had—usually by defeating his enemy. But in this story, Tom revels in a newly found freedom and sense of wonder by spending time in the garden with Hatty.

The closest this book comes to a bad guy is Hatty’s aunt. Though severe, she isn’t all that bad. After all, she’s provided a home for the girl and, despite her conviction that her sons come first, she is not a monster.

Time Can Be an Enemy or a Friend

The annoying grandfather clock that cannot seem to tell time properly provides the means by which Tom travels into the past to meet Hatty. Mostly, Tom uses this bit of sorcery to his advantage, visiting and revisiting his friend in different seasons. He even figures out how to have Hatty hide a pair of ice skates for him to find in his own time so that he can go ice skating with her in the past. Sheer brilliance!

But Time can also be an enemy of sorts. Tom cannot control it, nor can he determine when the adventure will end. And when it does, the boy is devastated. He wasn’t even able to say goodbye properly. The grandfather clock no longer permits him to go back, and he is left with only memories of Hatty at different ages, from girl to young woman.

Toward the end, when Tom is with Hatty, and she is all grown up, his brother magically appears and can see her, too. It’s because Tom has been writing daily to Peter about his adventures. And Peter’s imagination seems to be as vivid as his brother’s, thus transporting him into Hatty’s world.

Tom’s Midnight Garden is a must-read for adults and children alike. Every page is filled with warmth, with each character—major and minor—lovingly drawn. It is a coming-of-age story, with Tom gaining an early appreciation for life through the eyes of a lonely girl growing into a confident young woman. And finally, it’s a story of friendship, forged in a garden as timeless as imagination itself.

Winner of the Carnegie Medal

From beloved author Philippa Pearce, this sixtieth-anniversary edition is the perfect way to share this transcendent story of friendship with a new generation of readers. Philip Pullman, bestselling author of the His Dark Materials trilogy, called Tom’s Midnight Garden “A perfect book.”

When Tom’s brother gets sick, he’s shipped off to spend what he’s sure will be a boring summer with his aunt and uncle in the country. But then Tom hears the old grandfather clock in the hall chime thirteen times, and he’s transported back to an old garden where he meets a young, lonely girl named Hatty.

Tom returns to the garden every night to have adventures with Hatty, who mysteriously grows a little older with each visit. As the summer comes to an end, Tom realizes he wants to stay in the garden with Hatty forever.

Winner of the Carnegie Medal, Tom’s Midnight Garden is a classic of children’s literature and a deeply satisfying time-travel mystery. This newly repackaged sixtieth-anniversary paperback is the perfect entrée for readers of all ages to the vivid world that The Guardian called “A modern classic.” Features new interior spot art by Jaime Zollars. 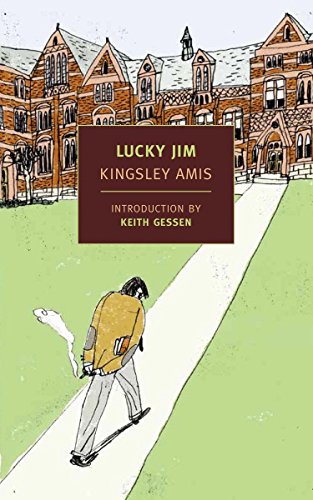 It’s not often I say this, but Little White Lies by Elizabeth McGregor blew me away. What starts out as a sad, curious mystery festers like sepsis, driving you to high fever and delirium until what you are left with is shock and a sickening truth that speaks to the worst human frailties. All through the book, the author is both careful and relentless. Her writing is unfailingly English, and she doesn’t brook impatience. You must wait for the revelation. And, dear Lord, when it comes you almost wish it hadn’t.

By nature, I am an impatient person. And, for better or worse, my writing reflects that. But in this brilliant novel, McGregor has taught me that sometimes it’s better to breathe and let the pain wash over you like a rinsing agent mixed with blood. Beth March never had a clue that a dead bird would lead to such misery—not just hers—and when she accepts the reality that has always surrounded her, it’s as if she is acknowledging not just one but many deaths.

Don’t go looking for heroes in Little White Lies—they don’t exist. Some, however, do act heroically at times, including Beth. There is no doubt I will read this book again. But I’ll have to wait until the fever subsides. In the meantime, I’m going in search of the 1998 TV movie version, which was produced by the BBC and co-written by the novel’s author. 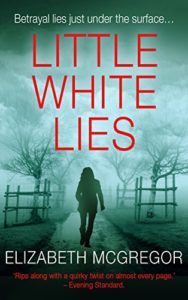 Any other year, summer arrived with the swallows. But this year, the broken body of a bird, left on the porch, serves as an omen of deception, a shadow cast over the days to come…

Beth March’s life seems unexceptional: she and her husband, David, have a conventional, quiet marriage.

The opening morning of the nightmare seems like just another day, aside from the unexpected body of the bird…but while Beth showers and prepares for the day, David drives his car at full speed into the path of a lorry. He is killed instantly.

From the moment that Beth learns of his fate, her world begins to shatter around her. Nothing in her life can ever be the same again.

No one can be trusted. No one is telling her the truth.

Was David having an affair?

Why did he go behind her back to sell his shares and take out another mortgage — and where is that money now?

What dark secrets lie beneath the picture-perfect image of the family down the lane?

As she unravels the chain of tragic events that preceded her husband’s death, Beth finds herself tossed from side to side on a sea of continually shifting information, never sure what is true and what is not.

Little White Lies is an intriguing tale of suspicion, deceit and the quest for the truth.